The Mythic Society has set up an Art gallery for one of the most illustrious artists of India, Sri N.G Pavanje . it was inaugurated on 11 March 2012.
About the collection: The collection in the gallery can be broadly categorized into
Paintings: About 39 paintings have been displayed in the gallery on various subjects like paintings of Temples, such as
Portraits of:
Paintings of Puja /Kitchen utensils, flower pots, Nature Paintings, lithographs are displayed. Collection also includes traditional chennapattana toys designed by the artist.Rare items of the collection include personal items used by the artist like pencils, pens, paint brushes, water colours, ruler/ measuring scale, Passport dated 1929 etc.The collection also consists of Awards and Distinctions received by the artist like

We also find old photographs of his family and friends displayed in the gallery. 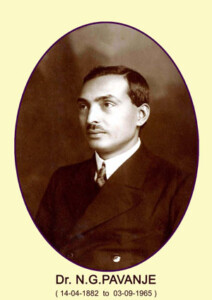 About the Artist:
Sri N.G Pavanje (1882-1965) was born in Yelloor village of Dakshina Kannada district and had his early education at Canara High School, Managalore. Trained in the nuances of painting at the J. J. School of Art, Mumbai, Sri. Pavanje was sent by the Maharaja of Mysore, Sri. Krishnaraja Wodeyar to Germany, from where he obtained his doctoral degree in art from the Universities of Berlin and Leipzig. He then spent many years in his service of Mysore at the Chamarajendra Technical Institute, Mysore where he taught painting to such luminaries as K. K. Hebbar and R. S. Naidu, Sri Pavanje’s excellence as a painter and artist has been widely acknowledged, though he did not run after fame by projecting himself and never held a single exhibition of his own works. His oils as well as water colours show his sensitivity to colour, and the delineation of form in his portraits was almost perfect. His palette did not contain the colours red and black. His specialty was the use of flat brushes, which was the sign of a master painter. Pavanje was founder of the Bangalore Art Society and the guiding spirit behind the establishment of the Chitrakala Parishath at Bangalore. His paintings today adorn the Jayachamarajendra Art Gallery, the Mysore Palace, the Mythic Society, Bangalore, the family home, and many private collections all over the world (mostly given away by him as gifts). No better words can sum up Sri Pavanje’s personality than those of his close friend, Dr. Zakir Hussain, former President of India: “Pavanje was a jewel among men, extremely nice and tolerant. Modern art has lost its moorings, but Pavanje had not. He was one of the finest men it has been my privilege to know.”THE DONOR Smt. Anasuya Pavanje, the artist’s daughter, holds a graduate degree in Science, with specialization in Mathematics, and a Master’s degree in Hindi from the University of AlIahabad. Her contribution to the world of arts and crafts is seen in her successful stint as a Member, Crafts Council of Karnataka and as Manager of the Cauvery Arts and Crafts Emporium M. G. Road, Bangalore where she did much to project the arts and crafts of Karnataka to an international clientele. She has published several books of art, including A Flower to Blush Unseen: Life and Works of N. G. Pavanje(1999) and Metal Craft of Karnataka (2010).